A lot of people think that Dan Bilzerian’s cool. Sure, he’s kind of arrogant, but you’ve gotta give some love to a guy that’s dedicated his life to gambling, drinking, hot chicks, guns and partying, haven’t you? Well, maybe so. But recent stories about him don’t make him sound all that nice. There’s that one about the adult star he threw off a roof into a pool and broke her an ankle. And now this…

Celebrity blogger and the dude behind TheDirty.com, Nik Ritchie, posted a video of Bilzerian seeming to kick a woman in the face during a nightclub altercation late last year. A beef has been bubbling ever since and now a fight looks to be on the cards. Bilzerian is even offering $250,000 to Ritchie if he can win!

Things quickly got out of hand on Twitter (the home of beef nowadays) and talk of a fight soon emerged. Check out the pair’s exchange: 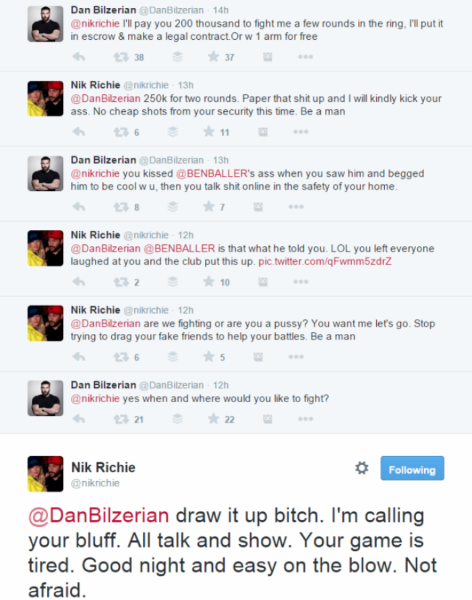 Who you backing to win should it actually come to blows? Loudmouth blogger Ritchie or cocky human bear Bilzerian…?