A British Strongman has set a new world record, whilst being cheered on by movie legend, and former bodybuilder, Arnold Schwarzenegger!

Eddie Hall, a 27 year old from Clayton, a suburb of Newcastle-under-Lyme, England, achieved a 462kg (1018.5 lb) deadlift at the Arnold Classic Australian Tour 2015, which is a new global record.

And during the gut-busting lift, Hall was given all the encouragement he needed from Arnie himself, who was cheering on from the sidelines. 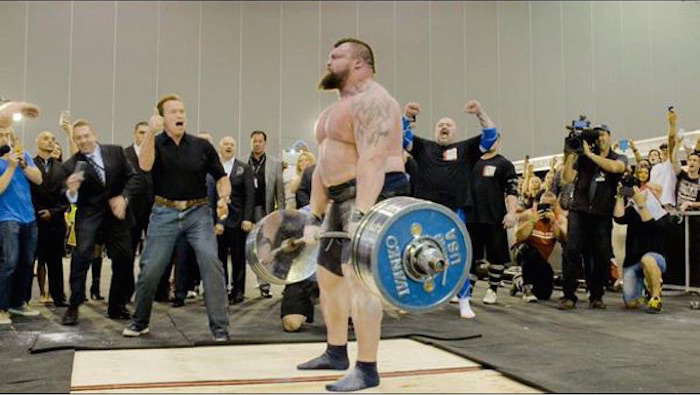 Eddie posted footage of the lift – which betters the 2014 record of 461kg set by Benedikt Magnusson – on his Facebook page. Following the extraordinary feat he said: “I had Arnold Schwarzenegger cheering me and he gave me a high five to congratulate me after the event – even though I left him hanging at first, oops!”

Schwarzenegger wrote on his Facebook page, along with a picture of Eddie; “This, ladies and gentlemen, is a world record deadlift at the Arnold Classic Australia. 462 kilos – 1,018 pounds. Congrats to Eddie Hall.”