Since the tragic death of Paul Walker in 2013, speculation has been rife over what is to become of the Fast and Furious series now that it has lost one of its biggest stars. Most people assumed the franchise would carry on, but there are some who have suggested it might come to an end. That speculation appears to have been stopped in its tracks after Vin ‘I AM GROOT’ Diesel took to the stage at the Teen Choice Awards to accept an award for best film for Furious 7. As well as paying tribute to Walker, the Walker family and Walker’s daughter, Meadow, Diesel dropped his biggest hint yet that the franchise would live on as he accepted the award on behalf of the cast and crew.

It’s no surprise really. Furious 7 made a whopping $350m at the box office, making it the most successful Fast and Furious of the franchise to date. Looks like Vin and the boys (and ladies) will be continuing their high octane adventures for some time to come. We can’t wait. 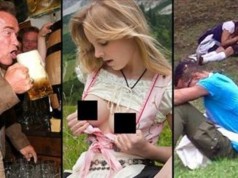 Check Out Oktoberfest 2015 In All Its Boozy, Spewy, NSFW Glory!