In Spain, one of the big national pastimes that isn’t shutting everywhere for two hours in the middle of the day is bull ‘fighting’. You frighten a bull, put it in an arena and give a man in a sparkly woman’s jacket (aka the ‘matador’) a sword and a red rag. They mess about for a bit and then the matador kills the bull.

But, seemingly to even things up a bit, they also enjoy a bit of bull ‘running’, where they frighten a bull, put it in an arena and let it run after and gore loads of p*ssed-up people off the street.

It was a spot too much sangria for this idiot in the red t-shirt (good color choice by the way, Sport). At this bull run in the northern city of Zaragoza, he got well and truly beat by this bull who even took off his pants to further embarrass him… 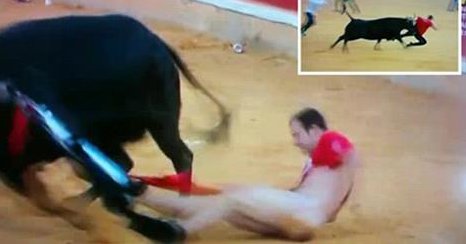 That’s what you get. Douchebag. Check out the full video: