Superior, Wisconsin –  For most people, Thanksgiving is a festive holiday where families all get together, enjoy dinner, exchange gifts and generally just enjoy each other’s company. But for many others, it’s nothing but family drama. And things couldn’t have been more dramatic for 21 year-old Wisconsin man Ryan Mills and his girlfriend this year.

Their ‘celebrations’ left them both behind bars. Superior Police were called to a family home at around 1pm on Thanksgiving day, afters reports of a noisy domestic incident were called in.

When cops arrived on the scene, Mills was discovered prone on the floor of the living room. Next to him was a tatty and blood-stained uncooked turkey. Mills was clutching his legs and crying, having been stabbed five times – once in the left arm and four times about the legs. His girlfriend, nineteen year-old Tiffany Rodriguez was on the couch, holding a knife and weeping.

According to the witness statements given at the police station, Mills had been drinking all morning and had had sex with the turkey carcass after he removed it from the refrigerator in order to prepare it for the family Thanksgiving dinner.

Rodriguez claims to have found him in the bathroom “going at it hard”. She grabbed the turkey and ran into the living room. Mills followed. Rodriguez admitted that’s when she lost it and began stabbing him. 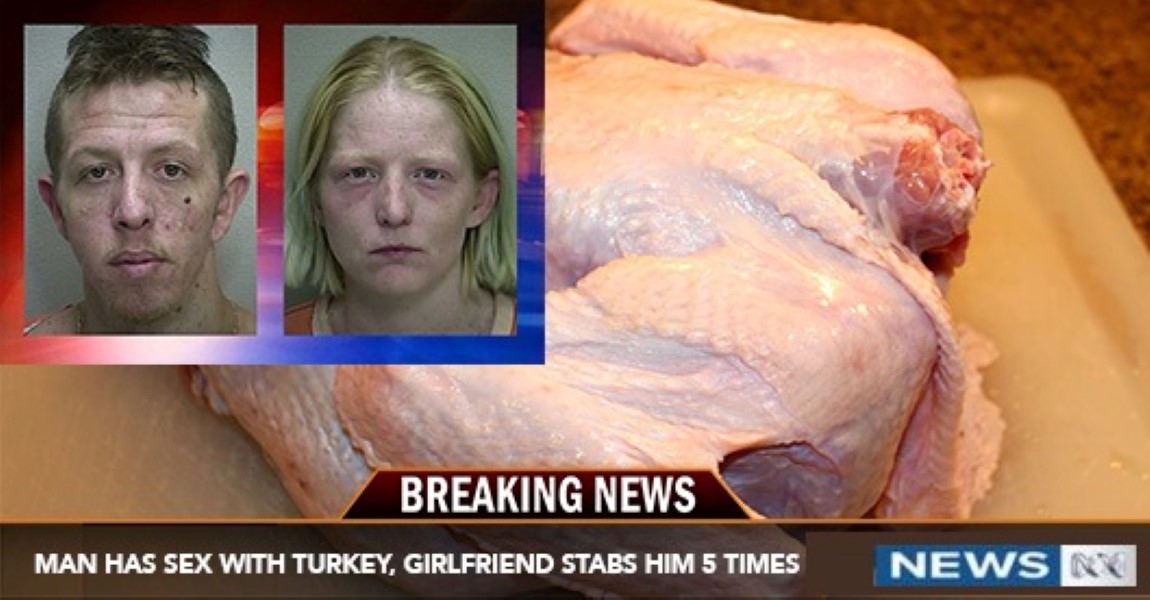 Rodriguez, for her part, was arrested and charged with ‘assault with a deadly weapon‘ and her now ex-boyfriend Mills is being charged with the lesser charge of ‘sexual gratification with an animal.’ But, in an impressive piece of legal footwork, his lawyer is arguing the case that he’s innocent of that charge because a carcass doesn’t technically qualify as an ‘animal’.

Wisconsin Public defender Fred Resnick filed a motion last week which claimed: “the statute does not prohibit one from having sex with a carcass.” He said that if you try to include corpses in the category of animals, then “you are going to have several cases in front of you this next year, we are in Wisconsin – that’s what people do here.”

If Ryan Mills is convicted, he could be sentenced up to two years jail time. The severity of the punishment is thought to be because of a previous conviction in ten years ago for shooting a dead pig named Mitzy for the purposes of carnal relations.