What would you do if someone just shot you? Hide and seek immediate medical attention? Or, stand around taking selfies to share on Snapchat?

Isaac Martinez, a student at East Valley Institute of Technology, Phoenix, AZ, decided to do the latter. Isaac was shot yesterday after bravely refusing to hand over his car keys to an alleged white supremacist who wanted his vehicle as a getaway car. The man had just run amok at the college, killing 1 and injuring 5.

He took to Snapchat to share two photos, one immediately following the attack, and the other whilst he was receiving medical treatment. The pictures were shortly picked up on by local press. 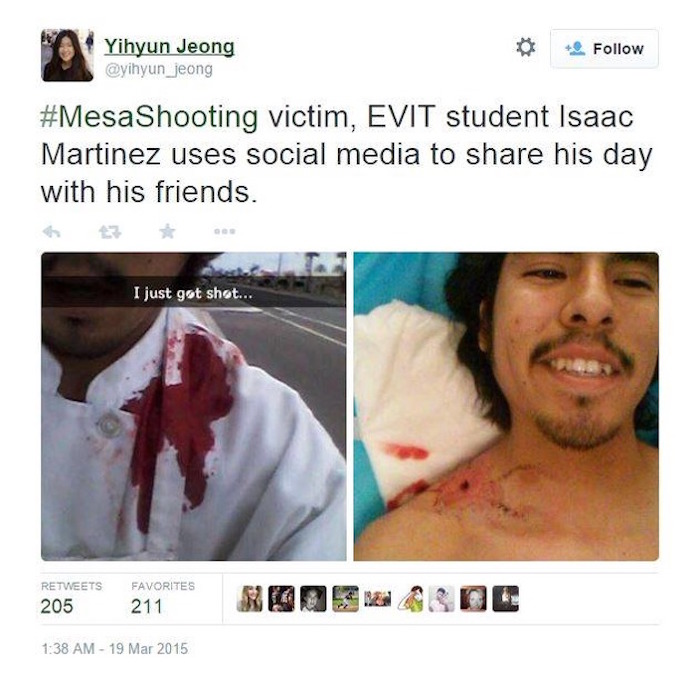 Later that day, Isaac posted details of the ordeal to his friends on Facebook:

“So I’m home and well! I have no complicated injuries and should heal fine. I had a bullet hit me from behind and go through my shoulder and out my collar area. Any higher or lower it coulda hit a artery, or shatter my shoulder blade. It was a miracle hit.…He came in and demanded my keys for a getaway car. Of course I said no, and next was him pulling out a gun and cocking it. Soon as I saw it I started stepping back. And yelled for everyone to step back and get down. Next thing I knew I was hitting the ground, got up as fast as I fell, and ran out the back exit. At the same time the assailant had started taking off in my chef instructor’s car. When I saw he had gone. I noticed the cops and fire trucks down the street and went there.”

Police have arrested a man on suspicion of carrying out the spree.